Improvements in technology for identifying microbes by DNA sequencing has resulted in an explosion of interest in the populations that associate with the human body.  Particular attention has focused on the microbes that inhabit human guts, because of the profound effects they can have on health and disease. Specific assemblies of gut microbes can act as an environmental factor contributing to obesity in susceptible hosts, a research area previously explored by Dr. Ruth Ley at Cornell University.  Dysbiosis of the microbiota has been observed in irritable bowel syndrome, ulcerative colitis, and Crohn’s disease.  Beneficial microbes modulate the immune system and help defend us against pathogenic organisms.  Symbiotic microbes in the intestine result in enriched capacities for polysaccharide, amino acid, and xenobiotic metabolism and the biosynthesis of vitamins and isoprenoids.

The largest immunological organ in the body is the gut-associated lymphoid tissues, which produce molecules involved in immune defense and signaling including cytokines and chemokines. 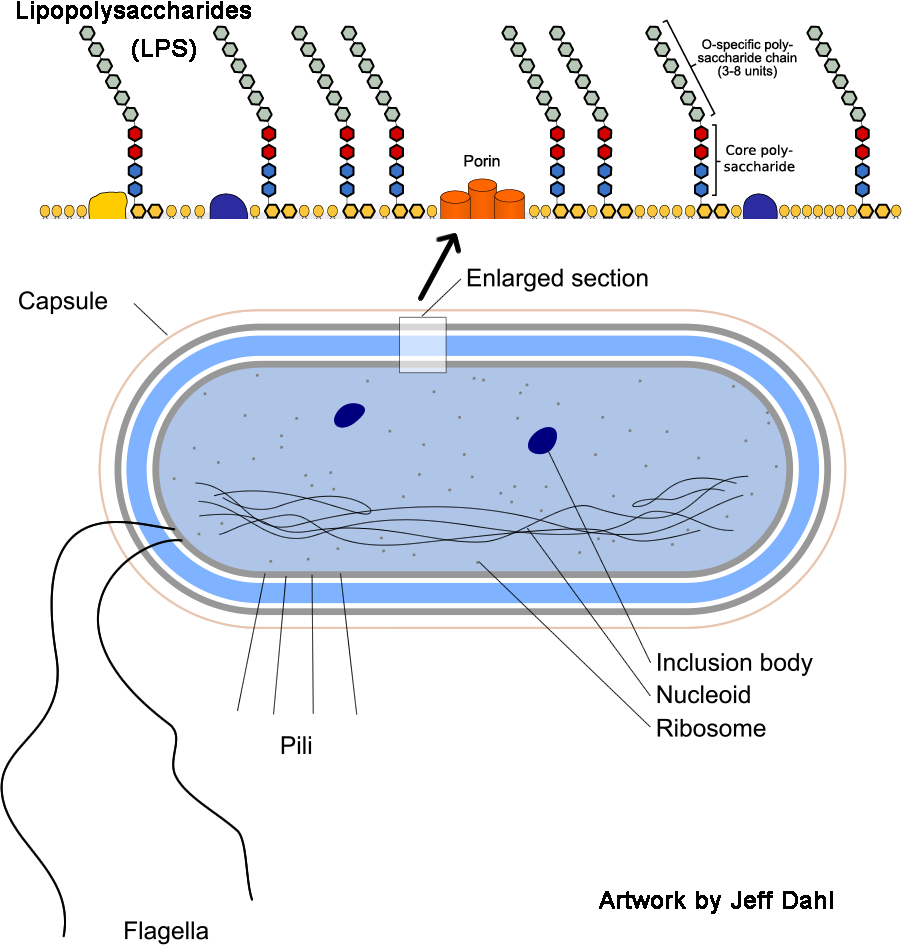 The bacteria that reside in the human gut communicate with intestinal epithelial cells and modulate their action and vice versa.  Nutrients and signals from intestinal cells affect which microbes thrive.   Dr. Ley’s group discovered that antibodies secreted into the gut can signal to motile microbiota to cease their motility, in a process that may be fundamental to gut homeostasis.

ME/CFS patients exhibit both chronic activation and dysfunction of their immune systems.  Cross-talk is known to occur between the intestinal immune cells and the microbes that reside in the gut.  An altered community of gut microbes due to a dysfunctional immune system could be responsible for some ME/CFS symptoms and contribute to chronic immune activation by affecting mucosal immunity and by disrupting intestinal integrity, thus allowing translocation of bacteria into blood from the gut.  While the intestinal epithelium normally bars passage of bacteria, disturbances in its function can allow microbial translocation that results in the presence of lipopolysaccharide (LPS) in the serum.  LPS can trigger immune responses and itself could be a factor responsible for some ME/CFS symptoms. ME/CFS patients have been reported to have increased IgA and IgM to LPS of enterobacteria.

A symptom often reported by ME/CFS patients is gastrointestinal disturbance.  Because of the possibility that the gut microbiome could be altered, and that intestinal integrity might be compromised, Maureen Hanson’s group collaborated with Ruth Ley’s lab, with postdoctoral associate Ludovic Giloteaux spending time in both labs to complete the project. 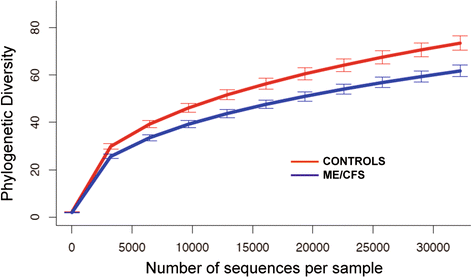 DNA was isolated from fecal samples from subjects identified by Dr. Susan Levine.  16S rDNA sequencing was performed and the taxonomic groups present in each sample were identified by consulting a database.  The number of different types of bacteria present in the ME/CFS patients’ samples was lower than in healthy individuals.  Lower species diversity is also seen in inflammatory bowel disease. 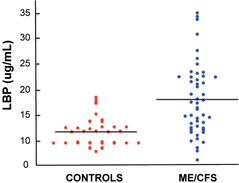 Analysis of blood from the same patients provided evidence for increased microbial translocation, loss of integrity of the intestinal epithelium.  Higher levels of LPS, LPS-binding protein, and sCD14, a receptor that detects LPS, were observed in the patients.

One conclusion that cannot made from these findings is that the dysbiosis of the gut is the cause of ME/CFS.  A plausible hypothesis is that disturbances in gut function are contributing to the symptoms of the illness.  The underlying cause of the abnormal microbiome and increased microbial translocation remains unknown.

An important message from this study is that there are quantifiable biological differences between a ME/CFS patient population and healthy individuals.  Other biological differences have also been reported in the past, but the incorrect hypothesis that the disease is psychological continues to persist.  Publicity about such findings is necessary to inform the public as well as health professionals that ME/CFS is a real, serious, and disabling physical illness.

A selection of articles about the microbiome study in the lay press:

This is a scientifically correct article that was published in a number of other locations:
http://www.upi.com/Health_News/2016/07/15/Gut-bacteria-may-hold-clues-to-chronic-fatigue-syndrome/8351468605308/

A well-written article, despite being illustrated by a sleepy cat:
https://www.bustle.com/articles/170504-what-causes-chronic-fatigue-syndrome-this-study-sheds-light-on-a-new-direction-of-research

While this article mentions that the microbiome study is evidence against the psychological concept of ME/CFS,  on the same web page is an outrageous, flippant video informing the public that patients can recover from ME/CFS by exercising, as a result of an erroneous report from the now-discredited PACE trial:
http://www.huffingtonpost.co.uk/entry/chronic-fatigue-gut_uk_577240d6e4b0232d331e9ad6

As well as being accurate, this web page includes an appropriate video about a severely ill ME/CFS patient:
http://www.natureworldnews.com/articles/24463/20160629/chronic-fatigue-mind-gut-bacteria.htm

This article includes a video from the Swedish National Association for ME that illustrates the severity of the disease.
Labroots: Chronic Fatigue Syndrome biomarkers linked to gut microbiome

The human gut microbiome is composed of bacteria, eukaryotes, and viruses.  Gut eukaryotes typically consist of protozoa and fungi and are mainly commensal ; nevertheless, the role such microbes play in healthy individuals is not well understood. 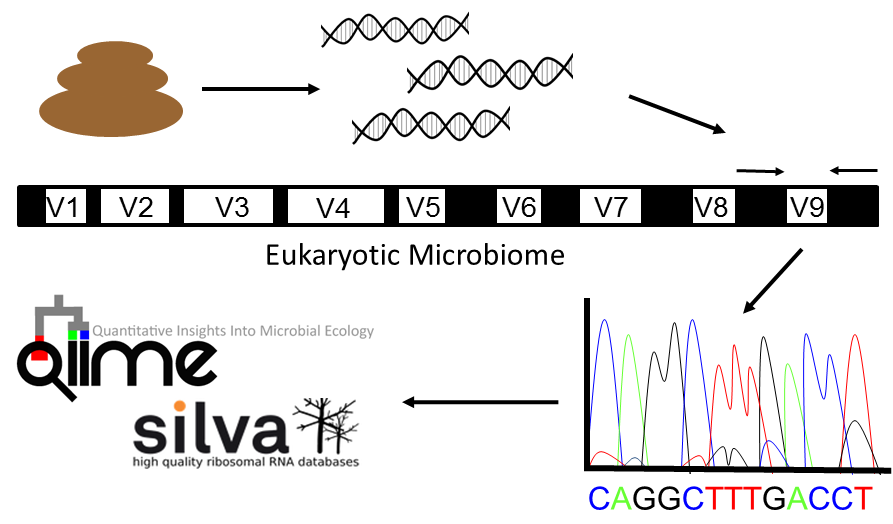 While most studies of the gut microbiota have focused on the bacterial components, methods have been developed to examine the eukaryotes through 18S rDNA sequencing.

Graduate student Alexandra Mandarano in the Maureen Hanson’s group carried out a pilot study of the eukaryotic microbiota, using a subset of the samples provided by Dr. Susan Levine for the bacterial microbiome study.  The majority of identified eukaryotes in the gut microbiome were fungal and belong to phyla Basidiomycota or Ascomycota.  Individual subjects were observed to have a unique composition of eukaryotes in their gut microbiome. 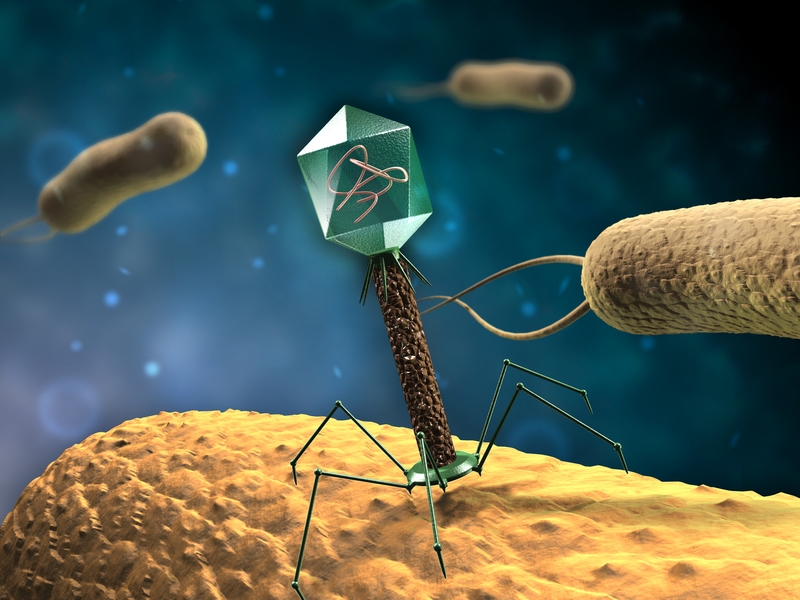 Postdoctoral Research Associate Ludovic Giloteaux in Maureen Hanson’s lab has been using Illumina sequencing to characterize the enteric virome of ME/CFS patients who participated in the bacterial microbiome study.   The predicted hosts of the identifiable phages and prophages were members of the Firmicutes and Bacteroidetes; these phyla, and in particular the families Ruminococcaceae, Lachnospiraceae and Bacteroidaceae, constituted the most abundant bacterial families in the sampled fecal microbial communities, as defined by 16S rRNA gene analysis.  Like the gut microbiome, the bacteriophage virome is abnormal in comparison to healthy individuals.